It’s OK for women to be bulldogs in the workplace, says a woman’s bulldog (and many women tech leaders)

I’m a bulldog. My owner is one, too. While it’s in my genes, it’s a distinguishing quality of hers – one she thinks women should be proud of, just like I am. She returned from a trip not long ago with a tag around her neck that said, “Women In Product Conference” and wanted to talk about it. (Not much of a treat to bring back, if you ask me). I jumped in her lap, like I always do. “Georgia,” she says to me, “it’s good to be a bulldog, and don’t you forget it.”

She’s a bulldog like me because when she knows what she wants, she goes after it, often to the point of stubbornness. She stands her ground and won’t be pushed around. But she’s also kind and compassionate and knows how to listen – also great traits of a leader. I’m all ears because that pretty much describes how I am, and she says it as she’s scratching my ears.

Then she says stuff I don’t really understand. “Some people think that being a bulldog is a bad thing for someone like me.” Again, my ears perk up. In fact, this picture of me was taken at the exact moment I heard her say that. 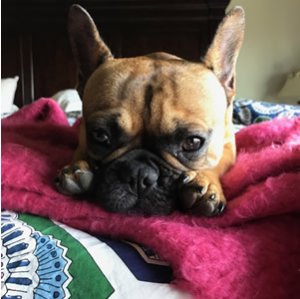 “Women are expected to be different from men at work,” she says. “Men can be bulldogs, although we don’t call them that. They can be stubborn and stand their ground and aggressively go after things like we do, but when women act like bulldogs we sometimes get a bad rap.”

I can see why that would bother her. You can’t push a bulldog around! She has many stories of  how people tried to push her around. Once, midway through a product-development sprint she was leading, they got some unexpected information that required some significant changes to solve the clients’s need.  She told the lead engineer (a man, not that there’s anything wrong with that) they needed to reallocate some of the work.

He initially balked and said he wasn’t going to disrupt what his team was doing. Brandi had to stand her ground and explain that her product role was to define what needs to be done to satisfy the client. Engineering’s role was to define the best way to get it done. It took plenty of grit and determination to stand firm for the client, but engineering ultimately backpedaled and did the work as requested.

Bulldogs stand their ground even in the face of opposition.

Another time, she told me that men doing the same job she was doing were getting paid more money. That really made me BOL (bark out loud). First, she conducted some market research to determine what would be fair compensation. Then, she sat down across from her boss and said, “I don’t believe I’m being paid equitably. How do we ensure I can get there?” He discussed the situation with HR and told her, “You’re right. We’re going to fix that.”

Brandi says she thinks all women – especially women in leadership positions – should be bold, strong and confident enough to step over gender barriers. The deck has been stacked against them for a long time, and they need to engage in the difficult conversations that will help them get what they rightfully deserve. Many of these conversations are challenging for everybody (you’ve heard bulldogs barking at each other, right?), but women have traditionally been discouraged from being difficult – and not just in the workplace.

Bulldogs ask for what they deserve – without apology.

You know I’m right. (Don’t argue with a bulldog.)

Brandi Johansen is an Expert Product Director at Acxiom LLC, where she leads the development of the Audience Cloud platform and supporting APIs. A self-proclaimed data geek, Brandi has spent more than 10 years building APIs, delivering data and technologies that enable successful marketing and client management. Most recently, Brandi defined and delivered Acxiom’s Audience Creation services, which enable the company’s data partners to monetize their data by applying machine learning to their existing audiences by predicting the likelihood of the same behavior across Acxiom’s extensive consumer data. A native Nebraskan, Brandi is an avid cook with an affinity for barbecue. She lives in Omaha with her French bulldog, Georgia Roux.