From Monopoly and World of Warcraft to sweepstakes and the Mega Millions, we all love to play games for a variety of reasons.  Some revel in playing to win, while others play to bond and be entertained or escape boredom.   And whether you agree or disagree with Maslow’s hierarchy of needs, one thing is certain: humans have needs…and many of them.   Maslow’s hierarchy describes these five innate needs as physiological, safety, love/belonging, esteem & self-actualization.

So what do games and prizes have to do with human needs?  Let’s explore this a bit further in the context of human nature, big data and the evolution of game mechanics.

Let’s take a closer look at World of Warcraft, a game originally introduced in 2004.  Almost ten years since its release, players have collectively spent about 50 billion (yes, billion) hours playing the game.  That adds up to about 5.9 million years!  In 2012 Americans spent $65.5 billion (yes, another b) on the Lottery. Great for state revenue, but very few winners.  The evidence clearly shows that games influence our daily lives in numerous ways.  Without getting too scientific, games require a combination of concentration and the satisfaction of being rewarded instantaneously, which causes a surge of dopamine (the pleasure chemical) to hit the decision-making area of the brain.  This begins to scratch the surface as to the psychological reasons (think Maslow’s hierarchy) why people play games. 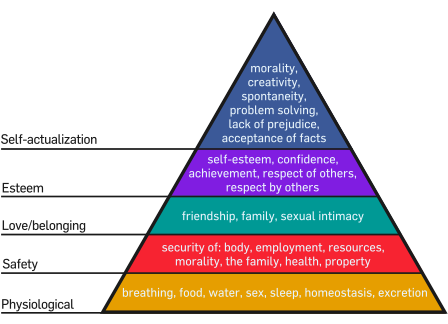 Ok, enough with the psychology…

Enter big data:  Given how technologically sophisticated companies have become with insights garnered from our every move, click and interaction in video games, websites and devices, big data has become the epitome for dissecting and interpreting our needs and desires.  This has given access to real-time interactions in the virtual world that adjust based on the individuals’ preferences and actions.  In the business world this translates into better customer service, timely offers and product recommendations, individualized targeted marketing by channel & device, and personalized messaging and unique engagement paths.  All of these activities must presumably lead to a bottom line growth plan and every interaction should ideally be tied to KPIs, which will then be used to measure the efficacy of the engagement and, thereafter, optimized.

So what can we learn from Maslow’s hierarchy of needs and how it relates to big data?

Performing a sophisticated data analysis of first party data combined with third party data can create a highly detailed view of an individual’s wants, needs and desires.  Leveraging third party ‘big data’ can include personas, buyer behavior, site interactions, demographics and more.  This detailed view can provide deep insights to understand what motivates the ‘individual’.  An organization can then implement game mechanics that fulfill a specific psychological need through an interaction, which will produce the desired outcome for both the user and the company.   Using a framework like Maslow’s gives a sophisticated marketer the psychological reasoning behind how to leverage the data analysis; tying those two together can produce highly impactful scenarios.

For example, using games in a marketing ecosystem removes the perceived risk from an activity that may not be desirable or otherwise seem risky.  This allows people to get more creative, bringing more individuality while making the process enjoyable.  Games also provide a platform to demonstrate skills publicly and give one a sense of purpose and belonging to a community (i.e. winning a contest, being the 1st on leaderboards, exclusive access, limited offers, etc.).  With the fear of losing eliminated from the equation, leveraging game mechanics is a desirable option for companies seeking to increase engagement and loyalty.

This begins to scratch the surface as to the psychological reasons (think Maslow’s hierarchy) why people play games. It’s what they go to when they want to feel consistency or safety, connect with others and create bonds and many do it to get respect or admiration or as an outlet for creativity or problem solving.  Combined with the intelligent use of data, companies can begin to harness game mechanics in a positive and powerful way.