Do you remember when you were little, and you did something really crazy that got you in in trouble?  The authority figure in charge would ask you why, you’d give some answer (so and so did it, or I don’t know…something really insightful that all kids resort to), and you got the “Just because you can, doesn’t mean you should” statement? 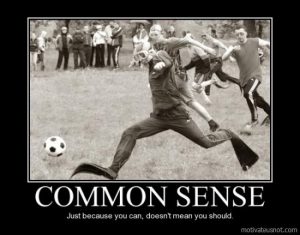 I know I did, and I’d march off to whatever the consequence was, muttering “when I grow up, I’ll never say that, ever.”

Guess what, I was wrong, but it wasn’t in relation to my kid.  Well, at least not this time.

See, I’m a slave to my iPhone.  It holds everything – pictures, music, my lifeline apps, you name it.  I don’t even have my husband’s phone number memorized because it’s all saved in that handy little 2.5 by 5 inch technological marvel.  It may even be jokingly named The Precious.

Because I’m so attached to my phone and the associated apps, I tend to be a laggard in updating the iOS, especially on the big upgrades.  Sure, having the bleeding edge items are cool, but I’m more concerned with everything being where I need it, when I need it.

Enter my husband, who in a desire to be helpful, and wanting to see the most recent “Big” iOS upgrade, downloaded and installed without backing up my phone, and effectively brought my neatly ordered world to a crashing halt.

That’s when I broke out the dreaded phrase.  On a side note, it’s highly entertaining to see a mature man revert to a chagrined little boy with 7 simple words.

Okay, so this is all funny, and we’ve all been there, but what does it have to do with marketing?  Simple, we are caught in one of those moments as it relates to technology and chasing Millennials, we just haven’t realized it yet.

Think about the world you live in day in and day out.  How many times in the last month have you talked or thought about Millennials, and wondered how to get more out of them?  It turns into a chain – drive more spend, but they don’t engage in email, which means you need alternative channels.  You don’t have the alternative channels, so you have to build them.  Budgets are realigning, focusing on the mechanisms with which to drive spend and loyalty from these individuals.

Let me pause here, and quote Forrester, specifically their latest repot “The Future of Shopping:”

The young consumer segment has shrunk in spending power and size.

When retailers see lower sales figures from these demographics, they worry that they failed to address that shopper’s needs or that startups like Instagram or Venmo change how people consume. Declines in real income are bigger reasons shoppers spend less and such drops have affected young consumers more than any other group. In 2013, households under 25 had only 82% of the purchasing power that they did in 1973. Of total shopping spend in the US, households under 34 comprised 21% in 2013, down from 28% in 1973

The long and short of it – Generation X and Baby Boomers are driving more year over year growth than their younger counterparts, but marketers are rushing to cater to Millennials via channels that are entirely foreign to their older, high spending constituency.

It all goes back to my upgraded iPhone, and me chastising my husband with “Just because you can, doesn’t mean you should.”  Apps which I use to facilitate travel, conference calls, etc. didn’t work on the newly upgraded iOS, because they didn’t have a patch out yet.  It kept me from productively executing my day, and made for one unhappy woman.

The same goes for evolving your marketing strategy.  Before rushing to build the next great App or evolving social channel, make sure you really are focusing on the people who will get you the most bang for your buck, both now and in the future.  If you look at your customer base critically, and prioritize based on key indicators like age, income, urbanicity, and key engagement factors, you’ll be able to manage expansion into the appropriate channels as you should, and not based on trends.  Sure, you can still build cool ways to reach your younger constituency so that, when they mature and have the disposable income, they will engage, but it will be scale.

If you do that, I promise you that you’ll never hear those dreaded seven words aimed at you.  Well, at least professionally.  When it comes to operating system upgrades and personal decisions, I make no promises.