Having just come back from Payments 2015, I was struck by the fact that payments have now become a “hot” technology again.  There is a huge amount of innovation going on worldwide around mobile wallets, social payments, P2P, biometrics, tokenization, and contactless systems around NFC and Bluetooth, an internet micropayments,  and these are just on consumer interface.  There is also a huge amount of parallel innovation going on in the core backend systems, such as real-time ACH (sponsored by NACHA), payment architectural frameworks, and application PaaS for Payments.

The emergence of mobile devices is an obvious reason why the payments space has suddenly become a cauldron of innovation, but it is hardly the only one.  Evaluating this emerging market, I identify three big trends that together are causing payments to be a hotbed of innovation.  In particular in the retail industry.

In a series of 3 posts I will be addressing each of these trends in detail.  Today, let’s start with a discussion of the new role of the physical store in a world where shoppers can shop anywhere, anytime, from any merchant, for anything.

Figure 1- In-store Sales as a Percent of Total Retail Sales 2013, By Category 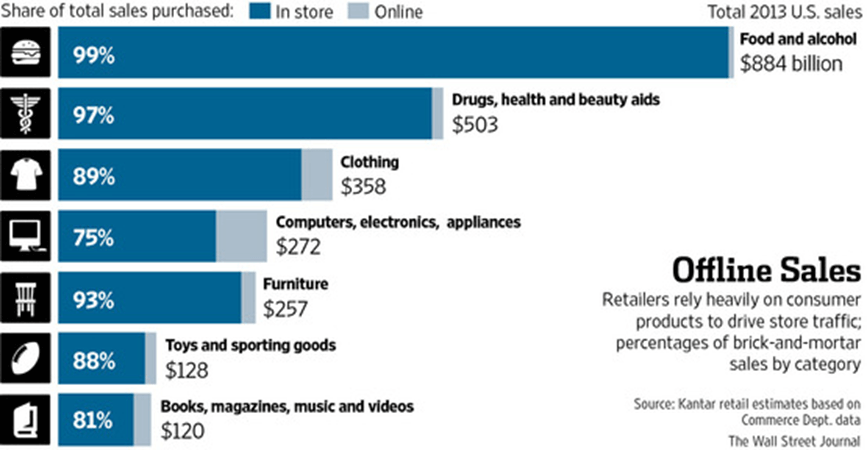 So for the extended foreseeable future through 2025, the retail store will be the main revenue source for retailers. In fact, we believe that the retail store may never become the secondary revenue source for many categories of goods.  Why?  For one reason, shopping is an experience.  It can be fun, a break in routine, an aspirational journey of trying on things that play to our vision of self. Also, touch.  Think about how you shop.  When you see something new that is of interest in a store, what is the first thing you do?  Touch. You pick it up.  You feel the material.  You look at the food label. You sit in the chair. You play with the keyboard.  You touch the screen.  It is the same exploration children do as they are learning about things, it is a critical way we learn as adults.   Merchants also like it when customers touch merchandise because they know consumers buy more of what they touch.[2]  For these reasons, the store/marketplace/-bazaar/souk environment will likely always be the thing that powers the cross-channel shopping experience.  We always hear about how people go to stores and then shop online.  But in fact, merchants in Q1 2015 reported to Gartner that 49.8% of a store’s revenue is influenced by activity from their ecommerce or mobile commerce channels.

But while the store may be taking on a new role as an anchor in the new cross-channel world, it is also taking on less of a role in terms direct interaction with the consumer and more of a role as a facilitator and mediator of the consumer to goods through their technology.  Over 50 years, technology has increasingly provided an interface into shopping, both in and out of the store.  First it was the telephone, both for making sales and for providing customer service.  Then it was the telephone/TV combination with infomercials.  Then credit and debit payment cards where consumers for the first time interacted with terminals directly instead of handing cards or cash to the checkout staff.  Then came the Internet.  Self-service checkout stations.  Then QR codes, then beacons, and now mobile.  Soon it will be wearables and smart shopping carts or smart cans that promote themselves[3].

The examples below will demonstrate this point.  It is not only that technology allows us to shop out of the store.  It also changes the nature of shopping in the store.  Technology adds an intelligence layer between the consumer and the goods they buy.  I’m in Safeway and, today, I can hold up my iPhone with a Safeway app to read a QR code posted on a shelf to get a discount on popcorn.    This isn’t me touching the goods or having information built into the good itself.  It is an intelligence overlay that adds value on top of the goods I buy.  I cannot access this added value unless I have a mobile device or other sensors to read it.  As a consumer, I tolerate this insertion of an “electronic field” between me and what I buy because there are benefits to doing so.  But however you look at it, technology in the store now mediates between me and what I buy, whether or not I as a consumer bring that technology into the store or the merchant provides it for me.

That mediation layer persists across the consumer’s interaction with the retailer, whether in store or out – at-home Internet shopping is one of those extensions of the electronic field.  What we call cross-channel shopping is really an electronic meta-layer that wraps around a retailers touch points with the consumer and provides a continuous, contiguous, and comfortable experience to the shopper.  The store is the core, it is the hub from which the electronic field radiates.  How far that field extends depends on the merchant’s skill at deploying technology that intermediates the shopping experience across time and space.

Next up: EMV, the Fraud Wave and Mobile Payments

[3] Actually, smart shopping carts have been tried several times but the technology wasn’t robust enough as part of a more effective shopping experience for the consumer to make them work.  Someday soon some smart retailer will get it right.