When it comes to households, I’ve provided some food for thought in my last two blogs. First, there is the question of how to define a household; then, what data should be considered when defining a household. That should sum up households fairly well, until you consider that everything changes.

One of Heraclitus’s philosophical principles is the Principle of Flux. In simple terms it means ‘everything changes and nothing remains the same.’ He uses the analogy of the flow of a river and goes into detail to explain how it is not possible to step into the same river twice because, although it is still a river in the same place, the water has changed. He also says that it is not possible to “come into contact twice with a mortal being in the same state.” Another philosopher, of a more modern time stated simply, “I have a bad, bad feeling that my baby don’t live here no more.” Maybe calling Jimi Hendrix a philosopher is a bit of a stretch, but it’s easier to translate his words into, “things change” than it is to translate Heraclitus’ words.

Hendrix’s Red House, like Heraclitus’ river, remains in place. Jimi went back to the red house, which was still in the same place as always, only to discover his baby was gone. She had moved on, much like customers do. Renters move. Families buy a new house and so leave one house and move on to another. Couples marry and move into a house together. Couples divorce. Maybe one person remains in the house, but the other moves out. Or perhaps both move out, then later marry other people and a new household is formed.  Families grow, shift, and change and that means their households do too. Maintaining contact with customers through all this change is difficult enough, but maintaining the definition of a household through the process is even more complicated.  When marketing to a household it is vital we identify the household accurately.

According to the U.S. Census, 12% of the population moved in 2012. The 2013 American Community Survey (1-year estimates), reports 27.6% of householders currently living in a rental unit moved in the past year. Let’s look at a couple examples of mover data using the Census Flows mapper tool.  Both maps show net numbers of people moving into and out of counties. The first map represent movers in Pulaski County, Arkansas (including Little Rock) as a small city.  The second map represents the more densely populated area of Los Angeles County, California (Los Angeles). 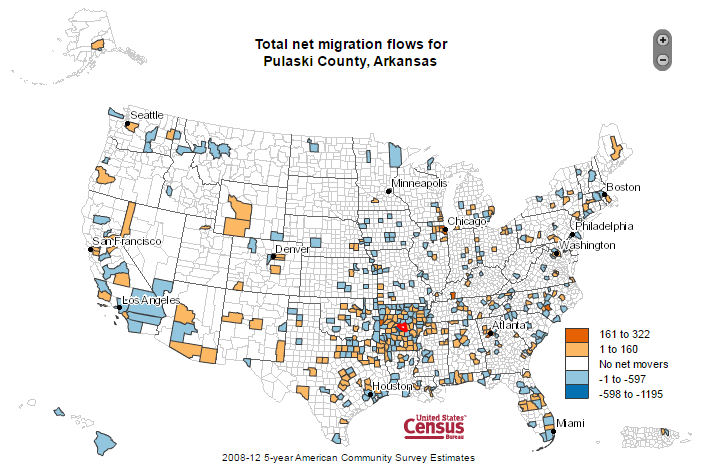 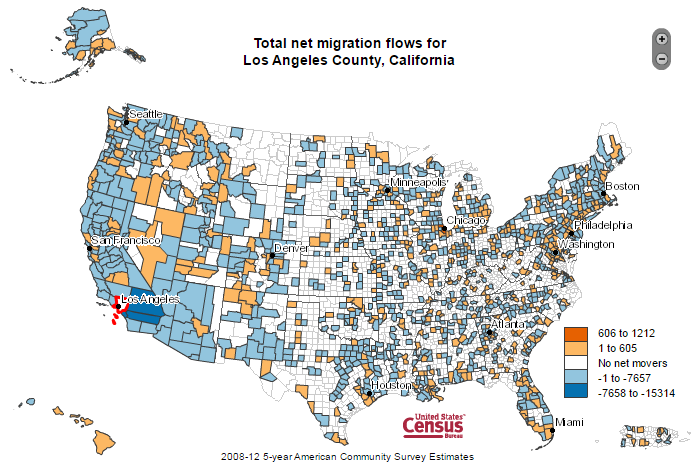 The maps make it pretty clear that in small cities as well as big there is a lot of change taking place. That’s a difficult thing to manage in marketing when you are trying to develop a long term relationship with your customers. But these maps only represent movement of individuals, not the changing structure of families and households. Without tracking these shifts through first party and third party data it is extremely difficult to know if a household moved intact or if it split in the process or merged with another household.

As marketers we want to know our customers, maintain relationships with them, their household, and their needs.  And when they leave the red house, we want to know not just where they went, but who is in the red house now. It’s critical when marketing at the household level.  Jimi’s baby was gone when he returned to the red house, so he just moved on.  That’s not what we want to do when we lose a customer.  The cost of acquisition is simply too high.